The question often arises “WHY DO YOU DO WHAT YOU DO”

In any worthwhile purpose, say in this case where new, obscure, lost, hidden information enhances the givers life and that of a recipient and after much success there is an automatic motivation “of not being able to do anything else” which of course speaks for itself.

Apart from the fact that in the writers early childhood surroundings the subject matters were always interesting it meant that even minimally the “doing” has always been there in some way. However, later in life these areas were enhanced incredibly so in meeting advanced teachings of the same similar and new subjects. THE POINT THEREFORE THAT ONES LIFE HAS ALWAYS BEEN involved. So the giving is a “Natural law” enactment where any place, venue, person, event that promotes this is to be welcomed.

The ability, the facility to be able to say NO to what one sees to be wrong whilst finding solace in learning, sharing subjects that have always been useful, important, in their own standing and the ability to use them is itself a great facility.

The Blue Way Group will be present at many events throughout the year. Below are some examples of past events. and Future events, lecture and workshops type of meetings which may also be found when scheduled on the “Meetings” page.

These Events can be in the form of Open meetings of Lectures, reading sessions of the Divinatory Arts and at the headquarters situated in Tonbridge, various fairs eg. Mind, Body Spirit type fairs around the country where there is an interest in any of the [few listed only] subjects below of an Esoteric, mystical nature, exploratory reasons regarding Human purpose etc. including workshops as per poster below, ie. “All day workshop”

This International Event is one that has been done for almost 20 years on the annual August bank holiday. Various “Merlin” type garments for this Medieval occasion has been used as is the way for “Participants”. The present picture is of a Past event… August Bank holiday weekend, East Sussex, UK 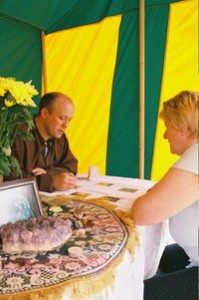 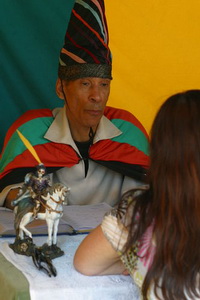 The BLUEWAY is particularly grateful to those who have regularly returned saying “Thanks” for the help received. It is also notable to this writer that many people after just one session have been able to get memorable results and are pleased enough to return saying thanks.

Interesting word “Original” which is understood by many as in the beginning of all ages rather than a stage in the procession of an age.Words relating to this is  Genro  from Goen[E] e repeated is shown by R.  1st. people on/of earth, a first model ? Expressions include the Motherly aspect at a level known as the “Gemrod” The person shown in the clip below has a “Gold” Hue in its directional approach, Silver in its passing in relation to the succeeding clip. [After the one immediately below]  Many people claim descent from some kind of an Animal, be it Ape, Monkey, Gorilla, Amoeba etc..Scientists & Theologians”  have argued their view for a long time.

The “Bluewaystudies” includes the knowledge that a “Human” & its Origin is Star level.

The “BLUE ROSES OF FORGETFULNESS”  Is an important  part of a healing routine. With the necessary music, movement [dancing both optional] is  well known for having the required results. Thus a dance, stance & attitude contribute to results and can also be dependent on the receptivity of the listener as  to the level of stock & subsequent connection.  A useful tool  with the fool, the kind or hostile.

There are on going meetings of the “bluewaystudies” group in Tonbridge, Kent.

It is reiterated that whilst  respecting,upholding other participants/groups/disciplines rights at PSYCHIC FAIRS, The  BLUEWAY has its own approach to any subject of the same name that is offered within any Venue.


It could be that as the years pass the lessons had may be summarised  by the benefits of a Teacher of some kind as indicated  by the Heiorophant.

THE JUSTICE CARD.    The Guardian of the way in Medieval times, dressed for his time since Justice is for all times.
With activity where many people were publicly demanding at least their idea of justice in 2020, there is “JUSTICE” in its actual meaning vs. an individuals idea which can be fatal. Thus 2020[4] for oneself & 2020 in Reality,=8 .  A beginner is advised  that should they  fly too High  & out of time they’re liable to be “burnt” by the SUN.

Card 8 of the “FROWN STRONG” Pack

Contact us for more information about Blue Way Studies, Meetings and Workshops.

OTHER SITES…….{No affiliation} below or other sites which may be used solely for advertising.